The market for low-carbon products and services is growing globally and within the EU represents revenues of over €150 billion each year. The EU has flourishing skills and industries in this sector but these industries need a strong home market in which to continue to develop, compete and grow. Producers and service providers are also active on the global market, contributing to Europe’s export revenues.

Energy efficiency policies have contributed to reducing energy intensity in EU industry by 19% between 2001 and 2011.

According to the IEA[1], if EU countries were to fully exploit the potential of energy efficiency, overall GDP would grow by up to 1.1% per year. The European Commission estimated additional GDP growth of up to 4.45% by 2030 if 40% energy savings could be achieved[2].

Construction[3] is a strong engine of the European economy. Investment in the energy efficiency of buildings robustly supports this sector which contributes nearly 10% to EU GDP. In 2011, the buildings sector generated 8.8% of the EU’s employment and 7% of EU value added (the building sector employed 5 times more people than the energy supply sector for the same value added). Nevertheless, up to 66% of jobs have been lost in the sector in some Member States since the financial crisis. Copenhagen Economics estimates that by harvesting the investment opportunities provided by energy efficiency renovations in the existing building stock, EU Member States can stimulate economic activity which can bring net benefits to GDP of up to €291 billion. This corresponds to between 1.2% and 2.3% of EU GDP.[4]

Supply security has become a major risk factor for Europe’s economic development. Today, the European Union imports fossil fuels worth €570 billion per year. Moderating energy demand could reduce the EU’s import dependency to below 40% by 2050 from 54% today, immediately allowing these savings to be invested in growth and jobs within the EU.

Already today, energy efficiency is the EU’s first fuel. The IEA highlighted that energy efficiency has reduced total final consumption in the 11 IEA states by 35% since the 1970s. Moreover, for every 1% of energy savings made, the EU can reduce its gas imports by an estimated 2.6%.

45.6%[5]. Investment in modern high-efficiency solutions can significantly increase this rate of efficiency. Indeed, the Impact Assessment for the Energy Efficiency Directive showed that the transformation sector has the highest individual sector improvement potential.[6]

Today’s buildings use 61% of the EU’s imported gas, with a study showing that the sector’s overall imports could be reduced by 60% in 2030 and by 100% in 2050 if an ambitious deep renovation policy were put in place[7].

High dependency on international energy markets exposes companies to price shocks which reduce the predictability of returns on investment. Sudden price increases cannot always be passed on to the market and undermine companies’ profitability.

Due to increases in worldwide demand and the introduction of energy taxes, energy prices are expected to rise over the next decade. Energy efficiency measures can decouple energy prices from energy costs for companies.

Furthermore, the European Commission’s scenario modelling also sees a direct link between energy consumption in Europe and international energy prices. If energy efficiency gains of 40% were achieved by 2030, gas prices could be 8% lower and oil prices 3% lower than in business-as-usual scenarios[8].

Energy efficiency is a driving factor for innovation in the manufacturing and services sectors. The development of the ESCO market is particularly important for optimising and modernising the EU’s infrastructure. The global market value of ESCOs is estimated at €12bn in 2010[9]. New products and system solutions are being developed that bring down the costs of zero energy buildings for new and existing constructions.

However, innovation centres will only stay in the EU if the legislator is able to provide an ambitious long-term framework demonstrating the political will to realise energy saving potentials.

Several studies have demonstrated that energy efficiency leads to significant net increased in public budget revenues. Copenhagen Economics estimates that ambitious building renovation programmes will increase public revenue by up to €128 billion in the period from 2012-2017. These benefits are associated with more activity and more employment, and derive from increased revenue from income taxation, corporate taxation and VAT, and from reduced outlay on unemployment benefits[10].

German research centre Forschungszentrum Jülich established that every euro invested by the German Federal Government in building efficiency programmes from the KfW bank yielded up to €5 of accrued public budget income in the same year[11].

The economic downturn has led to painful cuts in healthcare budgets in many Member States. However, it is well established that ambitious energy efficiency measures can significantly reduce healthcare costs. Assessing a Northern Irish building refurbishment scheme, the European Commission estimates that every euro spent on house retrofits yields a saving of 42 cents in terms of health care that is no longer needed. The Commission stressed that public health also benefits from reduced pollution resulting from energy extraction, transformation, transportation and use[12].

According to Copenhagen Economics, ambitious building renovation programmes leading to improved indoor climate could bring financial benefits up to €88 billion per year[13].

Since the first oil crisis in 1974, efficiency improvements have become the first fuel, according to the IEA. Energy efficiency investments made since 1974 have had a major cumulative impact on annual energy use, resulting in avoided energy consumption of 63 exajoules (EJ) – corresponding to 1.52 billion tonnes of oil-equivalent – in eleven IEA member countries in 2010.

Since 1999 (and in fact for the decade before that), the chemical industry has been decoupling production from energy use. Around 50% of the decrease in energy intensity is due to energy efficiency through the deployment of CHP (combined heat and power)[14].

The European Commission estimates that a 40% energy efficiency target for 2030 would reduce greenhouse gas emissions from buildings by as much as 63%[15].

The Ecodesign and Energy Labelling Directives set minimum energy efficiency requirements and inform people about the energy efficiency of a wide range of energy-related products. From light bulbs, refrigerators and washing machines to heating and cooling appliances for households, commercial and industrial purposes, the measures have delivered tremendous energy savings and CO2 emission reductions, while stimulating innovation by paving the way for manufacturers to develop more energy-efficient products to bring onto the market.

Energy efficiency allows our societies to do more with less. According to the European Commission, it enables a reduction in resources used for energy extraction, transformation, transportation and use[16].

The SME sector is a central powerhouse of the EU economy. The majority of SMEs in the EU are acting to become more resource efficient in order to reduce costs (63%). A recent FlashBarometer report by DG Enterprise reveals that in the SME sector, saving energy and minimising waste are the most common resource efficiency measures being taken by these companies.[17] A strong home industry can supply this need.

The creation of local skilled jobs is an absolute imperative for the EU. It is widely recognised that ambitious energy efficiency measures lead to significant net job creation.

The European Commission states that the number of jobs could be increased by up to 3% by 2030 if a 40% energy savings target were implemented[18].

Copenhagen Economics estimates that harvesting the investment opportunities provided by energy efficiency renovations in the existing building stock can create up to 1,480,000 jobs in the supply chain[21].

About 10% of EU citizens are considered fuel poor. Many governments spend more money on fuel subsidies than on reducing energy bills sustainably through energy efficiency measures[22].

The cost of heating is an important element of household expenditure and can absorb up to 20% of household income[23]. Therefore it is essential to increase the energy efficiency of heating and cooling systems and the thermal performance of the housing stock in the EU. With a view to tackling energy poverty, the Vulnerable Consumers Working Group led by the European Commission recommended that Energy Performance Contracting in collective buildings equipped with collective heating and/or connected to district heating networks should be developed.[24]

More generally, increasing energy efficiency in buildings is crucial for reducing overall energy consumption in the EU, for housing as well as for other uses. This is further supported by research showing that investing in energy efficient solutions in homes, instead of paying fuel subsidies, could remove nine out of ten households from fuel poverty[25].

Investments not only pay off for companies, but also for home owners. Investments in highly-efficient appliances are expected to save consumers an annual €100 billion on their energy bills by 2020, which equals to €465 per household[26].

The economic downturn has led to painful cuts in healthcare budgets in many Member States. However, it is well established that ambitious energy efficiency measures can significantly reduce healthcare costs. Assessing a Northern Irish building refurbishment scheme, the European Commission estimates that every euro spent on house retrofits yields a saving of 42 cents in terms of health care that is no longer needed.

The health of EU citizens would benefit twice from more energy-efficient societies: firstly, through better air quality thanks to a reduction of pollution resulting from energy extraction, transformation, transportation and use. And secondly, through better indoor air

thanks to the renovation of leaky building envelopes, the installation of better domestic equipment such as heating and ventilation, and improved lighting conditions.

Many studies have shown that an improved indoor climate leads to increased well-being and increased productivity. This leads to lower rates of illness, fewer sick days and hence increased profitability for companies.

[2] Commission Communication (2014) 520: “Energy Efficiency and its contribution to energy security and the 2030 Framework for climate and energy policy” (2014)

[3] Strategy for the sustainable competitiveness of the construction sector and its Enterprises: http://eur-lex.europa.eu/LexUriServ/LexUriServ.do?uri=COM:2012:0433:FIN:EN:PDF

[8] Commission Communication (2014) 520: “Energy Efficiency and its contribution to energy security and the 2030 Framework for climate and energy policy” (2014)

[11] Impact on public budgets of KfW promotional programmes in the field of energy-efficient building and rehabilitation”, Jülich Institute/KfW, 2011.

[15] Commission Communication (2014) 520: “Energy Efficiency and its contribution to energy security and the 2030 Framework for climate and energy policy

[18] Commission Communication (2014) 520: “Energy Efficiency and its contribution to energy security and the 2030 Framework for climate and energy policy

[20] R Janssen and D Staniaszek: “How Many Jobs? A Survey of the Employment Effects of Investment in Energy Efficiency of Buildings” (May 2012)

[22] Building Performance Institute Europe “Alleviating Fuel Poverty in the EU – Investing in Home Renovation, a Sustainable and Inclusive Solution” (May 2014) 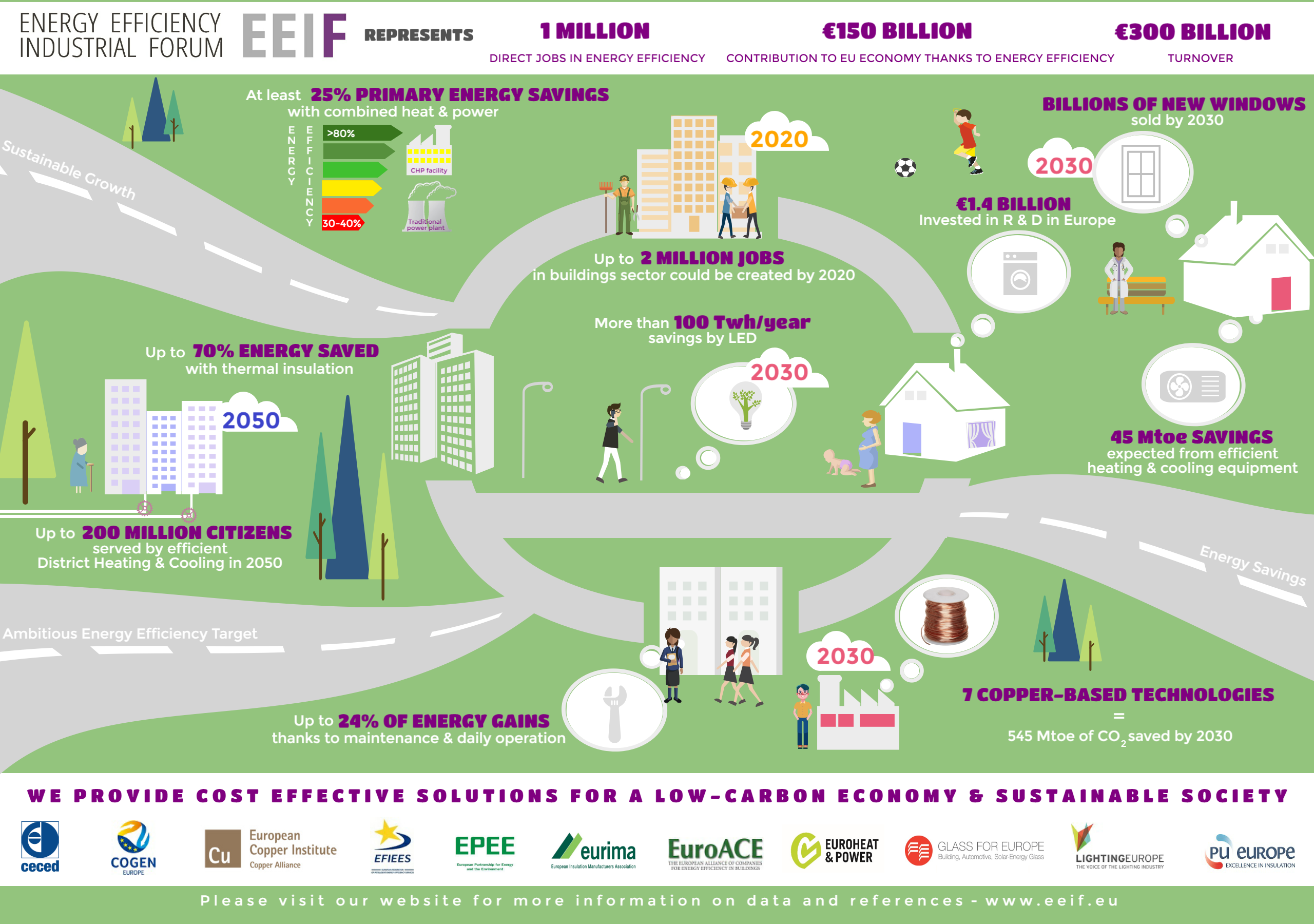 How our industries deliver energy savings and drive sustainable growth